When you think of living in Sydney you think gorgeous city, beautiful beaches and unfortunately a very expensive price tag.

We don’t think we need to tell you that Sydney is actually Australia’s most expensive capital city when it comes to housing, particularly for renters who are typically paying around $582 per week, according to CoreLogic.

But this may no longer be a problem for people willing to take part in a new TV series!

An Aussie TV company is offering up FREE rent for young Sydneysiders in exchange for participating in their new show about the housing crisis in Australia.

According to a Facebook post by the production company Screentime, they’re looking for young renters aged between 18 and 30 who will be put up in the spare room of an older person.

All you would have to do in exchange for having the cost of the room covered is be willing to do some household chores in return! Which let’s be real, you’d have to do if you payed for your own rent anyway!

“Are you a younger person who is looking for a home in Sydney? Would you be willing to do some chores in return for free rent?” the post reads. 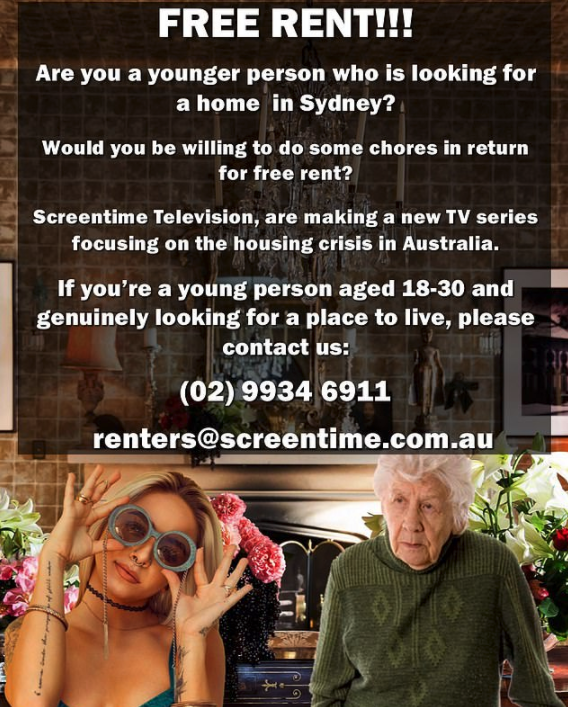 The show is being described as a “TV documentary series focusing on the housing crisis in Australia” and will be pairing younger renters with an older housemate.

The ad is also searching for older participants who might live alone and need help around the house.

“Are you an older Australian living alone? Would you like someone to help with your shopping and chores?” says the casting call.