As the world woke up to the news that former Wham! member and all-round phenomenal superstar George Michael had died, the tributes wasted no time in pouring in.

He passed away on Christmas Day, at home in England, his publicist said earlier in a statement. The cause is no known.

Rest with the glittering stars, George Michael. You’ve found your Freedom, your Faith. It was your Last Christmas, and we shall miss you.

I just heard about my friend @GeorgeMichael‘s death. He was such a brilliant talent. I’m so sad.

So sad to hear of death of #GeorgeMichael. Freedom still one of my favourite go-to albums. Thank you for the music. Wishing you sweet peace.

George Michael was a kind and gentle soul. #Wham

I’ve loved George Michael for as long as I can remember. He was an absolute inspiration. Always ahead of his time.

“This year to save me from tears I’ll give it to someone special” And this year @GeorgeMichael has given his heart to heaven. #georgemichael 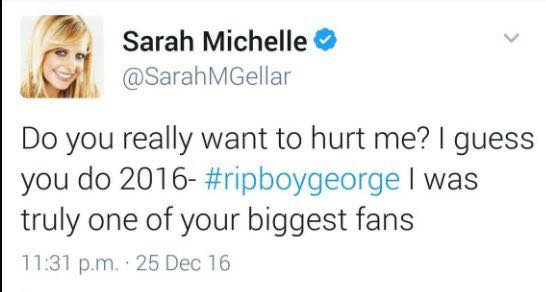 George Michael is busy putting the finishing touches to his special documentary film ‘Freedom’. He has discovered some incredible, unseen archive footage and is shooting additional interviews for the project so the film will now air in March 2017. It promises to be a real treat for fans! To coincide with the film’s broadcast, George and Sony Music have decided to move the reissue of the Listen Without Prejudice album to the same time.

So so sad , R.I.P George, a dear friend, the kindest, most generous & talented person .  My thoughts are with his family.#GeorgeMichael

I am beyond heartbroken and devastated by another tragic loss. R.I.P. dearest Georgy. #GeorgeMichael #ripgeorgemichael

Former Wham! singer and solo superstar George Michael has died. He was 53. Though no cause of death was revealed, his publicist said he “passed away peacefully at home.” Michael sold more than 100 million albums in his lifetime, bridging teenybopper pop and R&B both with Wham!, a duo that also featured singer Andrew Ridgeley, and as a solo artist.