The world was shook when we heard that Justin Bieber and Hailey Baldwin had become engaged during their romantic getaway to the Bahamas after just a month of dating.

According to witnesses, the big question was popped by the ‘Love Yourself’ singer at a resort in the middle of a crowd of salsa dancing guests. And of course, the 21-year-old model said yes!

Justin took to his Instagram account after rumours of the couple’s engagement spread far and wide to confirm that the news was true and gave a big spiel about how much he adored his new finance Hailey.

Was gonna wait a while to say anything but word travels fast, listen plain and simple Hailey I am soooo in love with everything about you! So committed to spending my life getting to know every single part of you loving you patiently and kindLY. I promise to lead our family with honor and integrity letting Jesus through his Holy Spirit guide us in everything we do and every decision we make. My heart is COMPLETELY and FULLY YOURS and I will ALWAYS put you first! You are the love of my life Hailey Baldwin and I wouldn’t want to spend it with anybody else. You make me so much better and we compliment eachother so well!! Can’t wait for the best season of life yet!. It’s funny because now with you everything seems to make sense! The thing I am most excited for is that my little brother and sister get to see another healthy stable marriage and look for the same!!! Gods timing really is literally perfect, we got engaged on the seventh day of the seventh month, the number seven is the number of spiritual perfection, it’s true GOOGLE IT! Isn’t that nuts? By the way I didn’t plan that, anyways My goodness does feel good to have our future secured! WERE GONNA BE BETTER AT 70 BABY HERE WE GO! “He who finds a wife finds a good thing and obtains FAVOR from the Lord!” This is the year of favor!!!!

Now that we’re over our shock and we’ve been all caught up on the couple’s loved up romance, albeit a pretty short one so far, we’re now interested to hear more about that MASSIVE diamond rock that we’ve spotted Hailey sporting on her ring finger.

And thanks to one loose lipped jeweller, we finally know some of the juicy details! Jack Solow, of Solow & Co. Inc. Diamond Jewellers is apparently the man behind the gorgeous engagement ring and he told E! News all about the process of designing the diamond with the Biebs.

“I was very genuinely excited for him and I had heard that he was with somebody very, very special and that they had bonded over personal things and I was just very, very happy like I would be for any young man who’s on that next stop of his life, but for Justin, of course, it’s that much more special and that much more visible for everybody,” explained Solow to E! News.

JB’s manager Scooter Braun is said to be the one who suggest Justin go to see Jack Solow for the perfect engagement ring and Jack says that when JB did come to him he pretty much already knew what he wanted for his future bride.

“Justin had a big hand in it,” said Solow. “He had certain design elements that he wanted and he had certain expectation and I think we delivered.”

The jeweller continued to say that Justin wanted the focus to be all about the diamond, which by the way is an oval cut with 18 karat yellow gold incorporated in it.

“It was about the diamond. I think he knew very well what Hailey wanted in a ring, but he wanted it very much to be about a very special diamond,” continued Solow. “He left it in my hands to try and select the most beautiful diamond for someone like Hailey.” 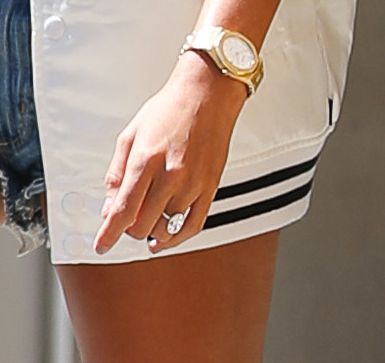 After discussing all of the design elements the ring itself was ready after just a few weeks. Solow said that he delivered the ring to Bieber personally and met with the star before the couple jetted off to the Bahamas. Looking at the ring through a jeweller’s loupe, Solow said that Justin was very impressed with the result.

“Like any other young man, he said, ‘Wow, it’s gorgeous,” recounted Solow. “There was one moment when he looked into the diamond and I said, ‘What do you see inside the diamond?’ He goes, ‘I think I see Hailey’s face’, so that was kind of cute.”

Solow didn’t make mention of the all important price tag on the diamond ring but he did say that he has heard that Baldwin “really loves” the finished product. He also told E! News that he made a $5,000 donation to the charity of Hailey’s choice in honour of their engagement, the Carol M. Baldwin Breast Cancer Fund.

And while others may have claimed that Justin and Hailey have jumped the gun by getting engaged very quickly, Solow said that he felt that Justin was “very, very ready for this decision.”

Well how darn cute is Justin! We’re loving this couple more and more as the days go by.