Mike E & Emma sat down with Stacey Hampton this morning to talk about the absolute BATSHIT INSANE EPISODE that went down last night.

She seemed quite demur and a little upset about everything that had happened, especially surrounded Michael. 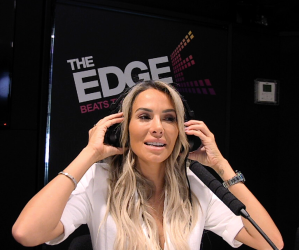 Michael was on the show earlier this week for a phone interview and completely denied any allegations, passing them off with jokes. When asked whether she believed his denial, Stacey sadly shook her head.

“I wouldn’t say I believe Michael, I would just say I had no words for him…there was so much in me that really wanted to believe him”

Emma went straight in asking her if she regretted the drama with Hayley and Stacey immediately agreed.

“Yes!! Coz I didn’t know the toothbrush was coming out that night too!”

Then immediately back tracked

“Okay she did deserve some of it though because…you don’t do that. We were friends”

The girl code was brought up, you know, chicks before dicks and all that.

Stacey re-affirmed that the girl (Hayley in this case) isn’t worse than the cheater (Michael) but it’s easier to blame the girl.

We love that introspective moment from her! Good job Stace!

Listen to the whole podcast below!

Mike E Bathes With His Dad