Holey Moley may be the most intense mini-golf experience you can have, so why not fully delve in and putt with a mini bathtub cocktail in your hands.

Why is it that anything on a mini-scale is absolutely adorable!

Holey Moley is serving up the very OTT cocktail ‘Rub A Dub Tub’. Featuring a mini claw-food bathtub, overflowing with Fireball, Triple Sec, Redbull, Passionfruit, Cranberry, and Lime. And to top it all off, there are two mini rubber ducks floating about. After one of these, your mini-golf skills will really be tested. 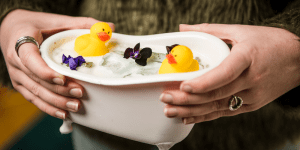 If mini-bath cocktails aren’t your thing (I mean, how could they not!), then how about you celebrate with your very own trophy cup. If you never had that grand final moment of skulling a beer from the premiership cup, or you just want to do it again, Holey Moley has the cocktails for you!

I don’t need any more convincing!

Maxibon's Teamed Up With Rick & Morty To Create The Pickle Rick Mint Maxibon!

Grill'd Has Release The Recipe For One Of Their Brand New Fried Chicken Burgers!