Kanye wants to be president.

We must now realize the promise of America by trusting God, unifying our vision and building our future. I am running for president of the United States 🇺🇸! #2020VISION

Kanye West then did an insane interview with Forbes magazine where HE retracted HIS support for Trump, admitted he’d never voted in his life, revealed he’s kinda of anti-vax and also very much not ‘Pro-Choice’ and just a whole lot of crazy.

Now that that interview has circulated the world, Elon Musk is feeling a little regret “We may have more differences of opinion than I anticipated.”, he tweeted again.

He then DELETED that tweet, probably in fear of Kanye’s terrifying wrath, BUT Elon should know better than anyone that once it’s on the internet it’s always on the internet. 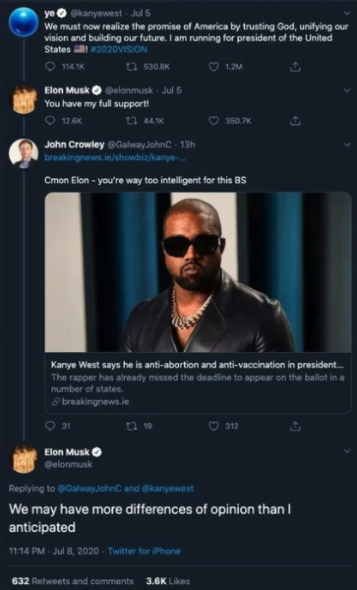