Ed Sheeran is on top of the music world; with four songs on the ARIA Singles Charts, and a lengthy stay on the Edge Top 20, following the release of his latest album; No. 6 Collaborations Project. He’s come a long way from the small town in Suffolk, UK, where he grew up.

But before going on to sell 150 million records, did you know Ed Sheeran failed music at college? 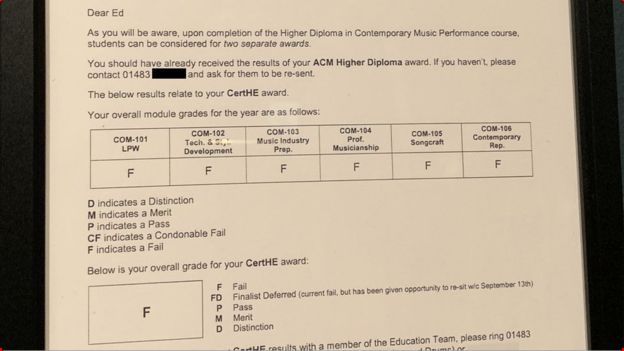 In a report card on display at a new exhibit in the UK, Sheeran received a fail in all six modules of his “Contemporary Music Performance” course; receiving an overall mark of (you guessed it), a fail. Not exactly what you might expect from such a talented performer.

Sheeran began studying at the Academy of Contemporary Music in Guildford, Surrey in 2009, but dropped out in 2010 to pursue opportunities as a professional musician.

Launching this Tuesday, in Ipswich, not far from where Sheeran grew up, a huge collection of Ed memorabilia is being put on display as part of the “Ed Sheeran Made in Suffolk” exhibition, which Ed’s Father, John Sheeran, curated. The BBC reports that, in the book that accompanies the exhibit, it claims Ed was “disillusioned” with the course after only three weeks. Soon after, Sheeran was asked to open for Just Jack, and according to John Sheeran, “[Ed] rang us to say that he was determined to go, even if it meant leaving college,” adding that “neither [he or his wife] were surprised.”

The exhibition also includes a multitude of paintings, photos, props and more from Sheeran’s career. The exhibition will be open until May 2020 at the Christchurch Mansion in Ipswich, UK.

Can’t get enough Ed Sheeran? You can catch him any time on his iHeartRadio Artist Station.