Before you read this article, just know that we do NOT condone driving with your phone.

Just don’t do it.

Don’t be that person.

From the 1st of March, according to the NSW Government website, these mobile phone detection cameras will be enforcing ‘the illegal use of mobile phones while driving OR RIDING’.

Someone anonymous posted a list to a popular facebook page they’d compiled of mobile phone detection cameras that have been/are in the process of being installed.

This isn’t an official or extensive list obviously (it’s literally written on an iPhone notepad), but check out the post below.

The blue means fixed cameras, yellow means portable and black means under construction (as of the 9th of March) according to a commenter on the post. 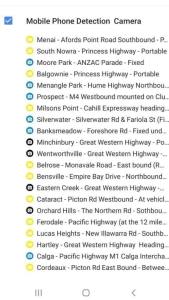 A lot of the comments on the post are actually calling out the poster, saying no one should need this list if they’re doing the right thing!

And we totally agree.

We reached out to Transport NSW to see if they could confirm the locations of these cameras and whether they had a statement for us.

They replied saying they could NOT confirm these locations and no official list of locations is available to the public.

There will also be no warnings at these camera sites.

The OFFICIAL response from Executive Director of the Centre For Road Safety, Bernard Carlon, is as follows:

“Mobile phone detection cameras are being deployed statewide and transportable cameras are regularly moved to different sites across the network.

The number of days at each site will differ so that enforcement does not become predictable.

This reinforces to all drivers they need to get their hand off their phone and know the rules no matter where they are.

Drivers who think they can continue to put the safety of themselves, their passengers and the community at risk – you have been warned and you will face consequences.”

Kind of scary and intimidating but I guess they need to be!

Uber Pets Has Launched in Sydney!